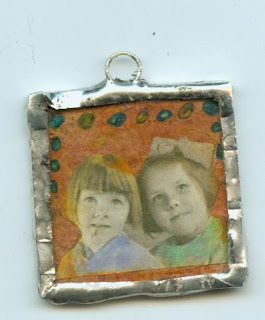 Last week I placed an order with Simply Swank for their Simply Solder Art Kit. I had read a few reviews on a couple of blogs that were filled with high praise for the kit and Melissa & Lisa the owners of Simply Swank.
I have to tell you that the shipping was fast. I ordered on Thursday and the kit came in on Monday. There was a problem though. The bottle of flux leaked all over the box. I immediately emailed Melissa who had taken my order over the phone on Thursday. She sent me out a new bottle of flux right away. It's great to find a company who is selling a great product and has excellent customer service. So if you were thinking about entering the world of soldered charms I highly recommend Simply Swank.

I have never soldered and really had no idea of what was involved but I had seen so many cute soldered charms and I had also bought Sally Jean Alexanders book "Pretty Little Things" a few months back. After seeing all of Sally's beautiful creations I decided soldering was something I wanted to learn.

The kit from Simply Swank comes with everything you need to get started. The kit even included a few sets of glass but I had a package of 1 1/2 x 1 1/2 memory glass from Ranger already on hand so I did not buy anything extra. I had a birthday gift card from my good friend Kim and I did not want to purchase anything extra in case after playing around I decided that soldering was just to hard or that I was not interested in the process after I tried it. 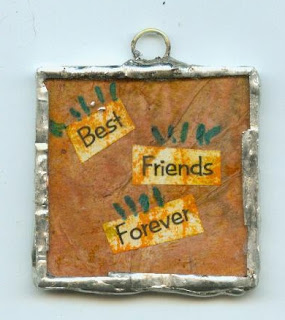 The pictures above is my very first attempt at soldering. It does not look very good but I will say that I did a few things wrong with the cooper tape. I actually had a hard time with the tape. Soldering was easier then getting that tape on the edge of the glass. Plus I was a little rushed as I was applying the tape. One of the corners also did not adhere to the glass so it did lift up from the heat. But I am very happy with my first attempt.
My husband was going to buy me a soldering iron at one of the local home improvement centers so I wouldn't have to wait to have the kit shipped. I am so happy he didn't talk me into it.
My 16 year old son was watching me as I soldered this charm. He had recently been making some repairs using a soldering iron from my son in law and could not believe how easily the Simply Swank Soldering iron melted the solder and flowed over the copper tape.
I am afraid I am going to have to hide my new toy! I just know my son can't wait to try and get his hands on it.

Anonymous said…
I am SO tempted to solder but as much as I burn my fingers with hot glue, I know I am an accident waiting to happen. Great job on the charms and congrats on winning the atc art!
September 27, 2007 at 8:07 AM

Anonymous said…
This charm is so sweet...darling image. You did fabulous for your first time. and i love the Sally Jean book. I just drool everytime I look at it.
September 27, 2007 at 11:38 AM

Anonymous said…
Hi! I came over from Heidi's blog "Every Day Cookies". I've been wanting to learn how to solder too, and I've beenw waiting to see how she liked it! I think I'll go order the kit now, your first attempt turned out great!
October 10, 2007 at 8:11 PM

One Creative Queen said…
While I was looking for lead-free solder online, I came across your blog. I'm so glad I did! Your first attempt is awesome - you did a great job. And after looking around your blog, I really like what I see. You're very creative - thanks for sharing! xx
September 21, 2009 at 3:01 AM

Popular posts from this blog 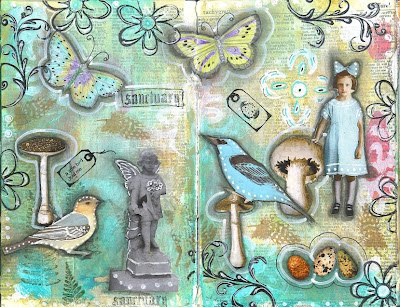 I have been busy with the grandchildren and I am not getting enough art time for myself but this past weekend I had a chance to work in one of my art journals. This journal is a hand bound journal I made using a old book cover and recycled scrapbook paper. The scrapbook paper is the heavy white paper you find in those older scrapbooks. I like to prepare my background pages in advance. So what I will do is gesso the pages and then paint them. I usually have about eight pages ready to go. Then when I feel creative I don't have to wait for the paint to dry on the backgrounds. Thanks for looking Arlene
Read more 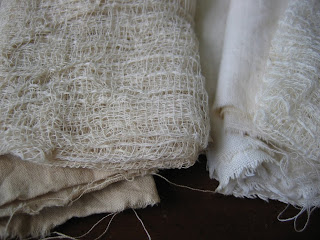 Lemon Balm Dye Experiment Over the weekend I cut back a pot of lemon balm I have growing on my porch. My intention had been to bundle it up and hang it to dry. After two days of watching it dry in a big unruly clump on my kitchen table I decided to see what kind of dye I might be able to get from the bunch. I'm not having much luck getting a good picture. This is what happens if I don't pull my camera out and snap those pics first thing in the morning. The above picture is as close to the true colors as I could get today. Back to the dye..So I filled a medium pot about half way and threw the lemon balm leaves and stems in. I let it come to a boil and then I turned it down to simmer. My house smelled beautiful, nice and lemony. My husband complained about the smell. I have cooked down lemon grass in the past so I could use the fibers to make handmade paper and the smell was truely horrible. So even though the lemon balm just had a nice lemony smell
Read more

International Charm Day Give Away 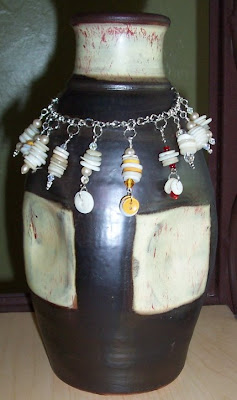 Sorry everyone I meant to get this posted last night but I am dealing with a sick child. I just got back from the doctors and the pharmacy. So I am extending the giveaway an extra day! I am happy to be a part of the first International Charm Day hosted by Amber Dawn. Check out the blog to find more Charming goodies International Charm Day 2009 At first I thought I would just post some pictures of charms that I have made in the past. And then I got to thinking what fun is that? So yesterday afternoon I sat down and made these charms for this giveaway. The give away is for ten vintage button charms that I made just for this give away. The charms are pictured above. ( The chain or the vase is not included in the give away ) So here are the details. My giveaway will run from Tuesday April 28th to Saturday May 2nd. There are a number of ways to get your name in the hat. 1 Leave a comment on this blog post today or the blog post tomorrow. 2 You'll get another chance added i
Read more